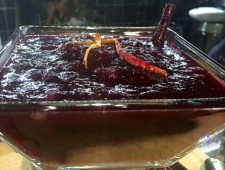 This is a recipe from my strictly food blog #ThisGirlLovesToEat, but one that I love pulling out for both Thanksgiving and Christmas.

My family never ate any cranberry sauce that was homemade.  In the preparations for

Thanksgiving, someone was always assigned the task of bringing two cans of jellied and one of whole berry cranberry sauce.  You couldn’t try and pull a fast one by buying store brand.  It had to be Ocean Spray on Grandma’s Thanksgiving table!

When I began cooking Thanksgiving dinner for my own family I automatically followed the same routine until I became obsessed with the Food Network a few years back and made my first foray into making cranberry sauce from scratch.

For the first few years, I stuck with the basic “back of the package” recipe:

Boil sugar and water, add cranberries and cook 10 minutes over a slow boil until berries have popped, refrigerate until time to serve.  *If you wanted it jellied you strained out the berry solids and skins using a mesh strainer before refrigerating.  BORING!

This year I put some time and creativity into the preparation and came up with a winner:

Bring sugar, wine and cinnamon stick to a boil in a medium saucepan.  Add remaining ingredients and return to a boil, stirring constantly.  Reduce heat to low and simmer 15-20 minutes.  You may want to use a splatter shield to avoid splashing when cranberries pop. Remove and discard cinnamon stick.  Cool slightly then move sauce to serving dish.  Refrigerate at least 2 hours and serve cold.  Sauce will thicken up as it cools.  Garnish with a few cranberries, blueberries and curls of zest.

Don’t worry, for the holdouts who just can’t stand not seeing the canned Ocean Spray jellied cranberry sauce, I still have the obligatory dish with the slices in the shape of the can. 😉  #CAGirlsGoneWine