Tried at a Pinot tasting a few weeks ago and this one ranked up top! Black cherry, cinnamon, plum & vanilla on the nose. Got the same flavors + strawberry, tobacco & a bit of cocoa on the tongue.  Sweet, smooth finish.  Took a bottle home with me & went back for 3 more.  This’ll be even better after sitting a bit in the cellar.

37% Cabernet Franc, 29% Petit Verdot, 28% Cabernet Sauvignon and 6% Malbec – This bottle was worth every penny of the $185 we paid for it!  The nose is a heady combo of black cherry, plum, cocoa promise.  It’s thick & velvety with long gorgeous legs that dip their toes into the pool of this big fudgy cherry bomb of red wine goodness! If the restaurant hadn’t run out we’d have had 2!  This wine scored a WE 93!

This blend of 62% Syrah, 33% Cabernet Sauvignon and 5% Grenache  has a really nice nose of dark chocolate, blackberry, a little wet earth and spice.  Nice tastes of black cherry, pepper, cocoa, and blackberry with a bit of spice and vanilla on the finish.  My biggest problem with Justin wines is waiting for them to be ready to drink. 😉

This is my favorite “everyday” wine produced by Westerly Wines out of Santa Barbara. They combine their Merlot (74%) with Cabernet Franc (26%) to create a wine that has so much depth to the flavors!  Black pepper, blueberries, bacon, & lavender on the nose – those flavors shine through as does spice & boysenberries.  Every bottle I’ve had has brought out something different. Wine Enthusiast gave it a 92 Point Rating & I concur!

100% Dusi Zinfandel –  Not only do I generally love everything Cypher, but this ruby red port dessert wine is made from Dusi zinfandel grapes, which I adore.  It’s got a distinct rum nose that makes its way into the flavor profile alongside hints of vanilla, caramel, red raspberry and finishes with a spicy coffee zing that lingers nicely. 👍👍 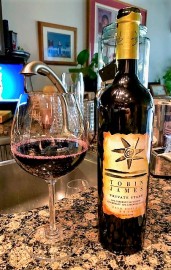 34% Cabernet Sauvignon / 33% Merlot / 33% Cabernet Franc -The nose was a pleasant Coffee/Spice/Blackberry with just a hint of cherry on first sniff.  The longer it was in the glass the more pronounced the cherry became and the more the spice turned to a white pepper.  This velvety, dry wine has a nice acidity and a spicy finish that lingers nicely.  I did use an aerator after my first glass because I think this wine could have used just a bit more time in the bottle. I was impatient, as I usually am when my TJ shipment comes.

I LOVE THIS WINE! Juicy blackberries, chocolate, black cherries and rose petals with coffee & a little black licorice. Dark Red Velvet. Bold with a creamy richness but a zippy, peppery finish that stays with you. Did I say I love this wine? Big thanks to Sommelier William Lewis at The Winery Restaurant in Tustin, who turned me on to this beauty!

We drank this wine on 12-28-16.  It was a wine purchased by a Doctor friend of my Father-In-Law’s, who always shared from his cellar generously, even when just coming over for take-out.

Because they were in their 80’s, cocktails were always poured before we ate, and after-dinner drinks were the norm, one of the two bottles he’d bring for the 6 of us would always be left behind.  Lucky for us this beauty was one that stayed.  The problem with wine left at Dad’s was that it wasn’t stored correctly, so drinking it after finding it in a cupboard under the bar (STANDING!) was always a crap shoot.

We decanted it through a filter after the cork disintegrated and were pleasantly surprised!  Deep rusty red, light cherry/oaky nose, a fair amount of sediment, bit it still retained a medium body, plenty of French elegance, light tannins, and that Margaux character with a balanced finish.  All-in-All, it ended up being a very enjoyable wine.

I’m not a white wine drinker, mostly because, with very few exceptions, the whites I’ve tried have tended toward a citrus profile that I just haven’t enjoyed.  This Chardonnay changed my mind!  The deep golden tint and oaky, peachy, jasmine nose was just a tease for the luscious honeysuckle, apricot, velvety beauty that finished with a nice crisp surprise of lime.  My only complaint was that I didn’t anticipate how much my girlfriends were going to like this wine and we ran out.  Wine Enthusiast Rated this Santa Rita Hills beauty a 93!