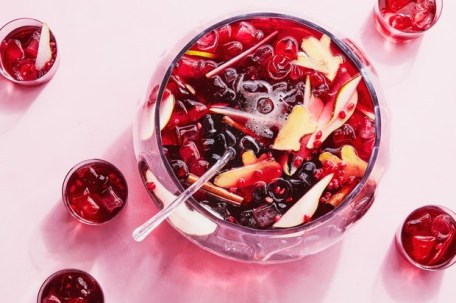 If you are hosting a good-sized crowd for Thanksgiving and want to try and steer them away from the hard stuff until you bring out the fine wine at dinner time, you may want to consider this spin on Sangria from my go-to resource, Epicurious.com.  It can be made ahead, you can use pretty plastic punch cups (so no cocktail glasses to wash), and you can display it in your prettiest bowl far away from the kitchen, so there’s no one going back and forth to the refrigerator for drinks and getting in the way in the kitchen.

When you are picking a red wine to use in this sangria you don’t want to use a cheap red wine that you wouldn’t drink on its own, but you don’t need to break the bank either.  Some great choices are:

Bring pomegranate juice (and cranberry juice if using), cinnamon sticks, allspice, and one-third of ginger to a simmer in a small saucepan over medium-low heat. Cook 10 minutes, then remove from heat and let steep 10 minutes.

To serve, fill pitcher or punch bowl with ice and pour sangria over. Top with cider. #GirlsGoneWine